Learn How to Last Longer

Please watch the video below to learn more about premature ejaculation and the treatments we offer.

How common is PE?

PE is the most common sexual dysfunction reported by men but is still under-diagnosed and under-treated. Estimating the prevalence of PE is difficult since many men do not want to talk about it, while others may not even perceive that they have PE.

However, recent research indicates that 25-30% of men struggle with PE.

PE can happen at any age and its prevalence is consistent across all ages.

BrandeisMD has a number of innovative solutions for premature ejaculation and welcomes patients with this medical condition.

What is premature ejaculation (PE)?

Premature ejaculation (PE) is ejaculation in response to minimal stimulation before, at the time of, or shortly after penetration, and before the man wishes it, and over which the man feels he has little or no control. It is important to recognize that premature ejaculation is a subjective diagnosis and totally depends on the satisfaction of the partners.

At BrandeisMD, we recognize that PE is distressing to a man and his partner.  We take your concerns seriously and we are motivated to help you. As an expert in male sexual medicine, I have significant experience helping men with PE, and I can work with you to try to achieve your goals.

Premature ejaculation is a silent problem that affects one out of every four men.  The treatment options for this condition are limited and include numbing creams and antidepressants.

There are two phases of Ejaculation.  During emission the vas deferens contracts and pushes sperm thru the prostate gland into the urethra.  The seminal vesicle releases fluid which mixes with the sperm.  During ejaculation, the bladder neck contracts to prevent retrograde ejaculation and the muscles at the base of the penis and urethra contract forcing semen out of the penis.

Premature ejaculation is when a man’s sexual climax occurs earlier than desired, and this results in distress of one or both partners.  It occurs in about a quarter of men of all ages.  The International Society for sexual medicine defines premature ejaculation as a male sexual dysfunction characterized by ejaculation always occurring within 1 minute of vaginal penetration.  The inability to delay ejaculation of nearly all vaginal penetrations and negative personal consequences such as distress, bother, frustration, and the avoidance of sexual intimacy.

PE affects numerous aspects of a man’s life including sexual confidence, interpersonal relationship, and the satisfaction of both partners

What causes premature ejaculation? The short answer is that no one knows.  However, the studies suggest that levels of serotonin, a neurotransmitter, is involved in predicting the time to ejaculation.  Normal ejaculation requires sexual interest or stimulation, which leads to penile tumescence resulting in excitation and penile erection leading to penetration.  There is a plateau preceding orgasm with ejaculation and then post-ejaculatory tumescence.  Men with PE have a brief plateau period.

Behavioral therapies are another option for addressing PE.  The squeeze method was developed by Masters and Johnson.  The start and stop technique is another popular approach.

Local anesthetic cream is the most common option for addressing PE.  It is either sprayed or applied to the underside of the penile head 30 minutes before intercourse.  A man needs to make sure that cream is removed before vaginal intercourse; otherwise, it will cause vaginal numbness.  Popular brands include Promescent and KY.  Studies show that numbing creams can almost double the intravaginal ejaculatory latency time for the time between penetration and ejaculation.

St. John’s Wort is a plant that flowers around the time of Saint Johns Day in late June.  The scientific name is Hypercurium Perforatum, and it contains Hypericin and Hyperforin.  Hyperforin blocks reuptake of neurotransmitters like serotonin, norepinephrine, and dopamine.  As an antidepressant, St John’s Wort is superior to paroxetine.  However, it is an unstable compound and difficult to isolate in pure form. Thus Hyperforin is obtained from the actual plant.

Hyperforin is a noncompetitive reuptake inhibitor meaning that it does not bind to and block the reuptake transporters. Instead, it affects the presynaptic sodium channels that control reuptake transporter activity.  Because of this novel mechanism, Hyperforin does not cause many of the side effects associated with prescription selective serotonin reuptake inhibitors like Prozac, Zoloft, and Lexapro.  Hyperforin also improves sleep because it increases the brain output of melatonin at night.

Both studies confirm the safety of St. John’s Wort for mild to moderate depression and that St John’s Wort lacks the typical side effects of selective serotonin reuptake inhibitors.  Side effects are due to Hypericin content rather than the Hyperforin, which is the active ingredient in PreLONG.

One study using a rapidly dissolving form of St. John’s Wort half an hour before intercourse showed that 14 out of 16 men reported improvement in intravaginal ejaculatory latency time, resulting in increased sexual satisfaction score.

Another randomized, double-blinded study with 42 men using 450 mg of St. John’s wort versus placebo showed an improvement of  IELT from 1.2 up to 5.8 minutes.

St. John’s wort, in general, is very well-tolerated at recommended doses.  Uncommon side effects include anxiety, dry mouth, photosensitivity, dizziness, stomach upset, headache, and fatigue.  St. John’s wort is metabolized in a way that may interfere with the metabolism of other medications, including antidepressants, blood thinners, some cancer drugs, cyclosporine, and digoxin.  Please ask your physician if you are on any of these medications.

The other substance in PreLONG is L-citrulline, which is a nonessential amino acid which is plentiful in watermelon.  Your kidneys convert L citrulline into another amino acid called L-arginine, and a molecule called nitric oxide which is essential for proper circulation.  Nitric Oxide is beneficial in improving erectile function.

PreLONG, from the makers of AFFIRM, comes in bottles of 120 veggie capsules and consists of Hyperforin from St. John’s Wort and L-citrulline.

Another option for the treatment of premature ejaculation is an SSRI antidepressant like fluoxetine, sertraline fluoxetine, and clomipramine.  Side effects include fatigue, yawning, nausea, and diarrhea.  It also may result in a decrease in libido and affect sperm motility.

Priligy, also known as Dapoxetine, is an SSRI made for PE due to its short half-life.  If taken 1-2 hours before intercourse, Priligy results in a 2-3 fold increase control and satisfaction.  However, Priligy did not have a high refill rate due to the cost of the medication and the on-demand requirement.

Other options for PE are less effective and included Tramadol, Oxytocin, acupuncture, and Botox.

Premature ejaculation affects 1 out of every 4 men between the ages of 20 and 50.  It is psychologically distressing and difficult on relationships. 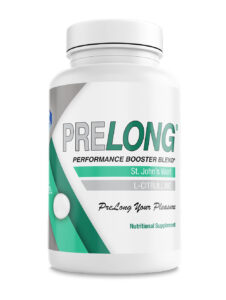 We can help you! We honor men and appreciate the contributions that they make. At BrandeisMD we feel that men deserve to be rewarded for their hard work and integrity. We understand that physical intimacy between partners is an important part of a healthy relationship, and at BrandeisMD we help to restore and enhance the sexual abilities of men as they age.

Dr. Judson Brandeis, is a Board-Certified Urologist with over 20 years experience.